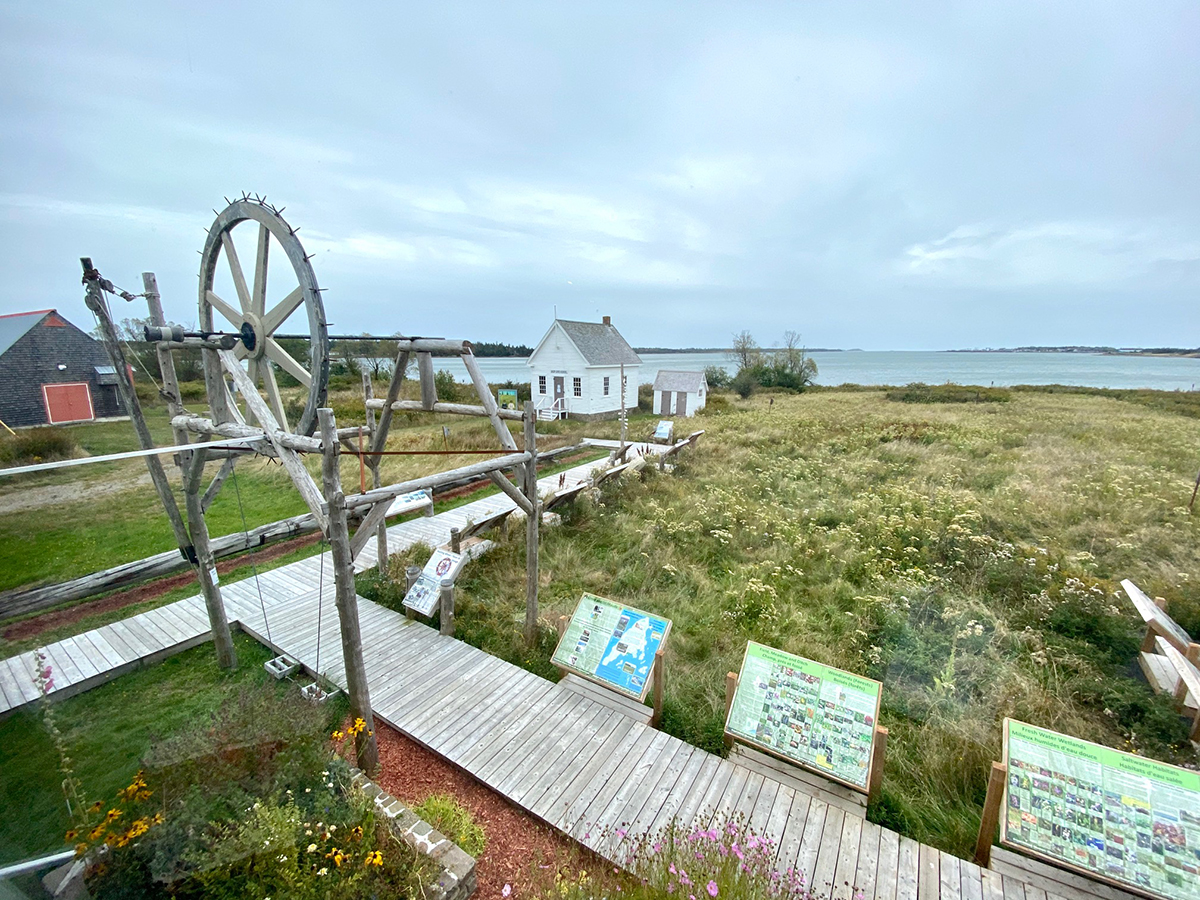 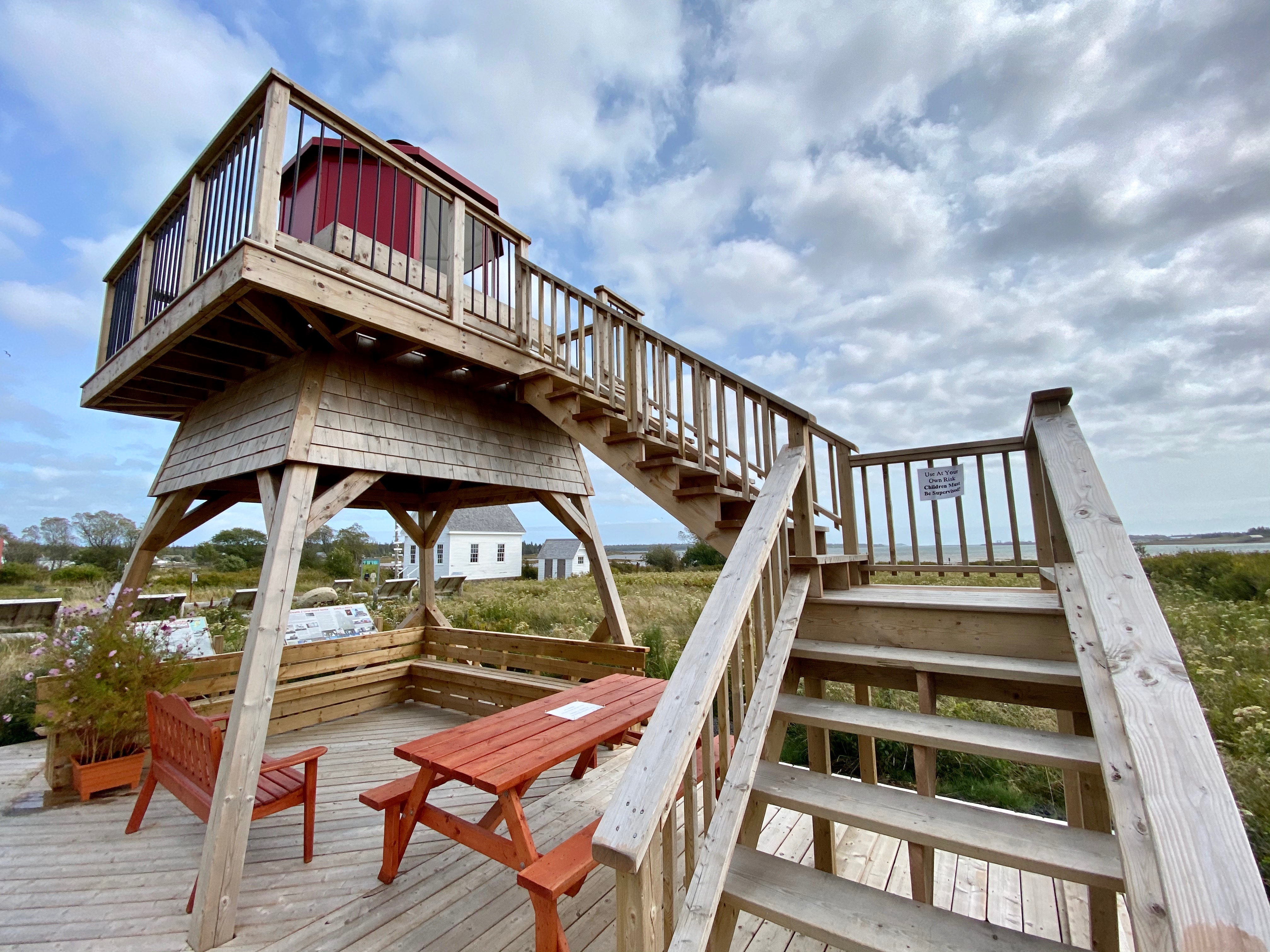 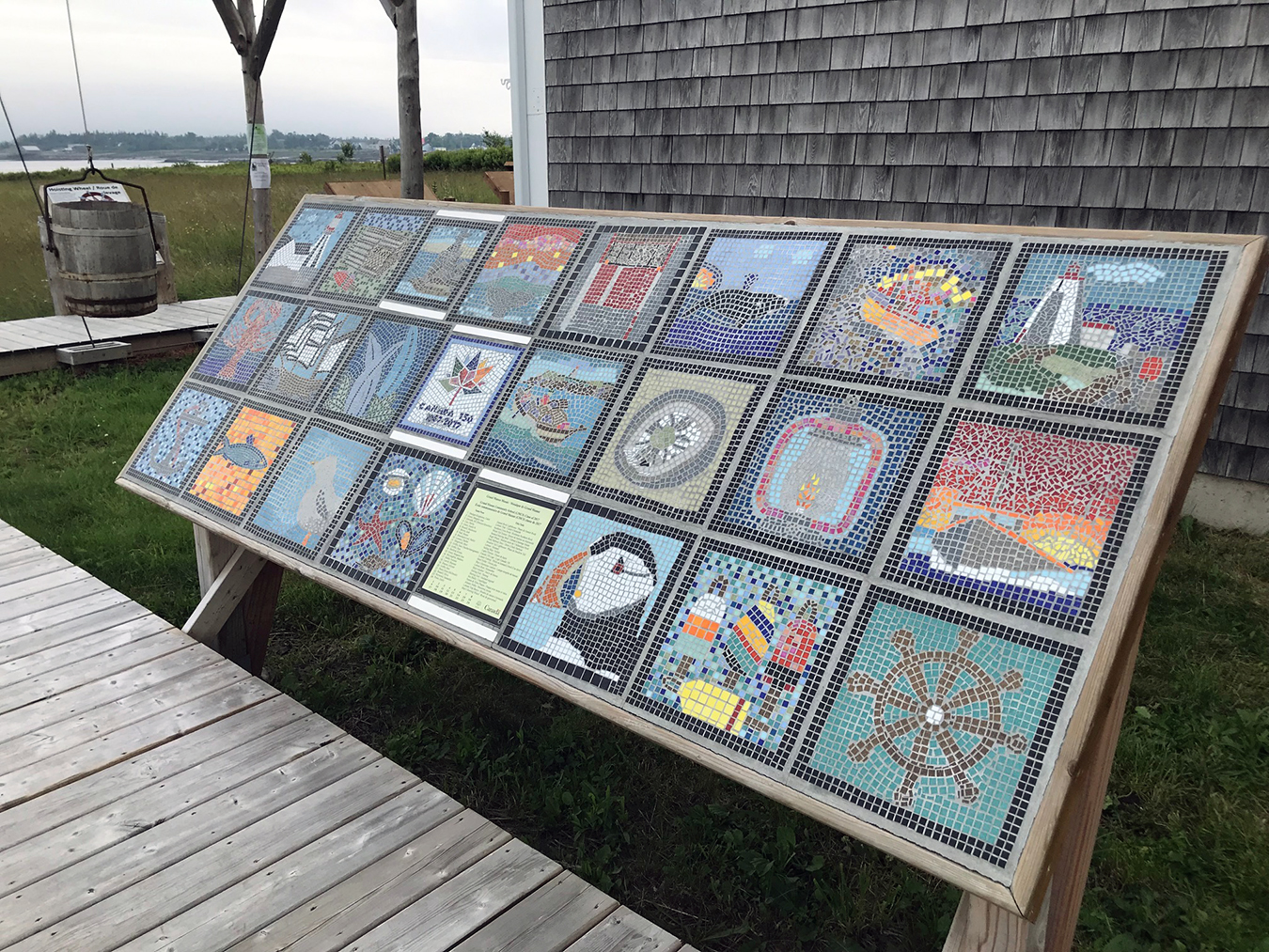 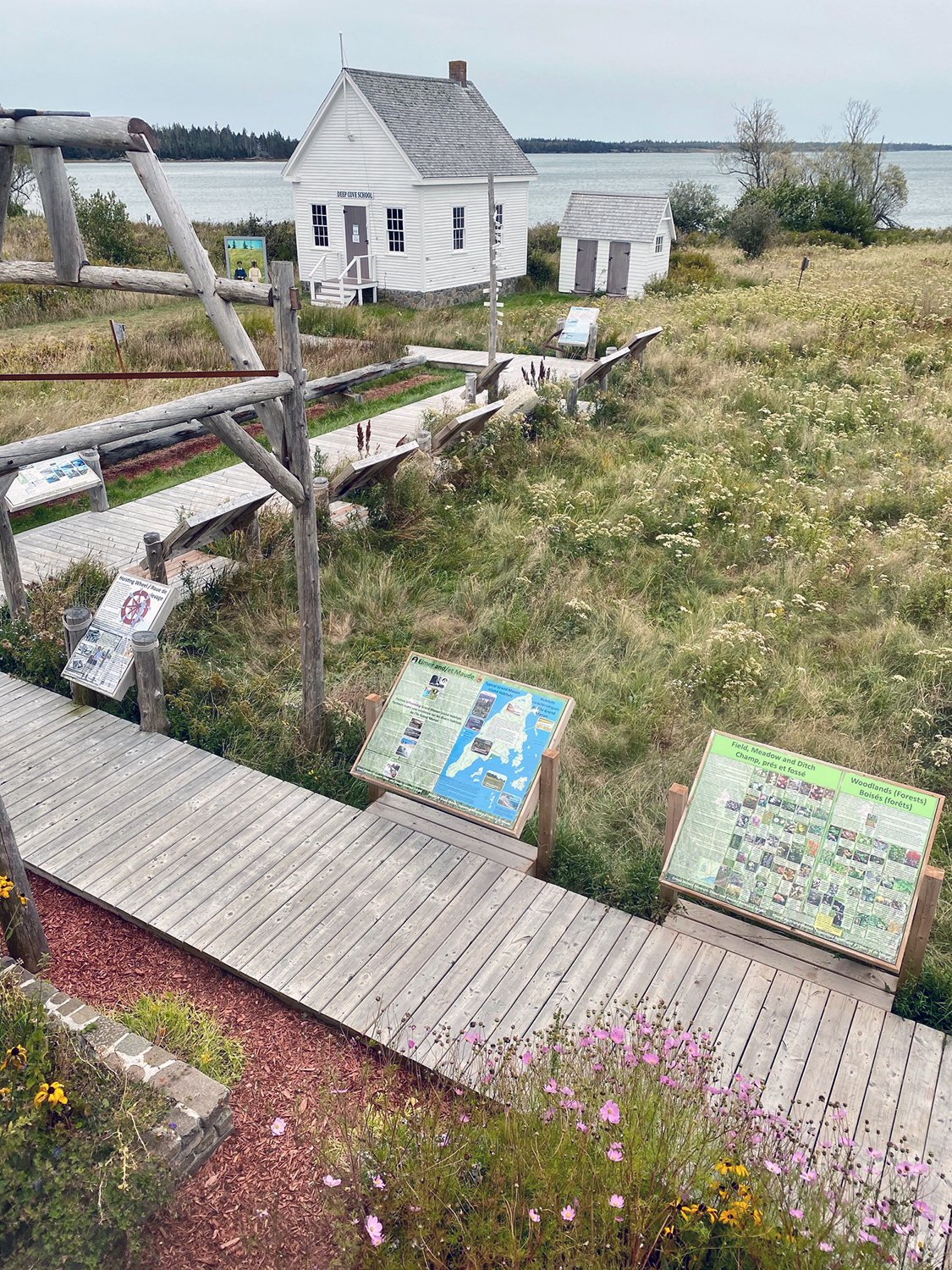 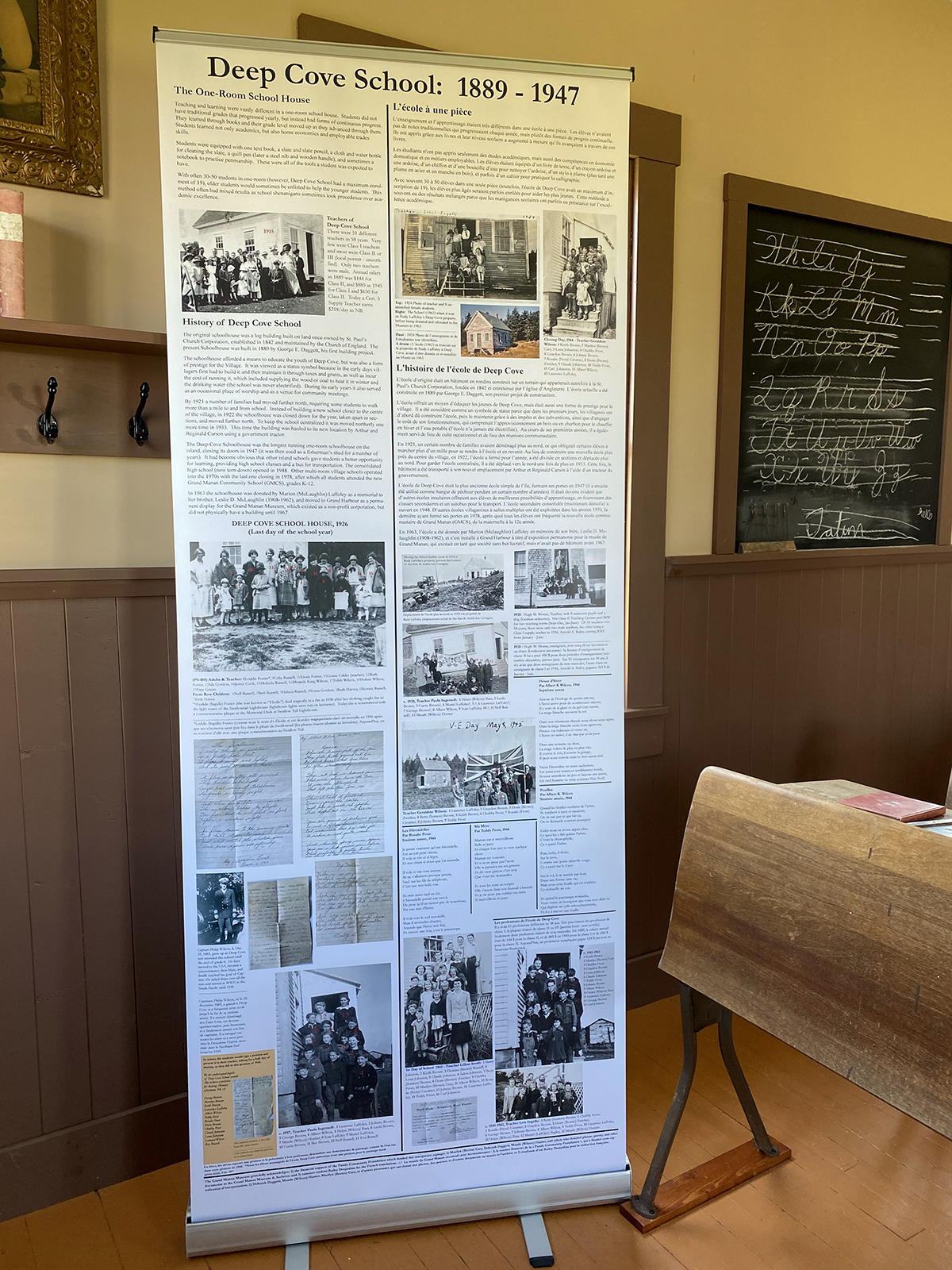 A WALK THROUGH TIME BOARDWALK EXHIBITS

Between 2017 and 2020 we have created an outdoor exhibition space that spans a boardwalk where you can take “A Walk Through Time” reading eight interpretive signs explaining and illustrating the island’s early settlement and social and economic development.  Funding for “A Walk Through Time” was provided by a Federal Canada 150 Sesquicentennial Grant.

Artefacts on display along the boardwalk include:

The mosaic was a sesquicentennial art project of the island’s GMCS graduating class of 2017, and was funded by a Federal Canada 150 Sesquicentennial grant. (3 photos)

This new exhibit, named in honour of Elmer Wilcox and his daughter, Maude Hunter, outlines, with many colour photos, the major botanical habitats found on the island and neighbouring islands.  Elmer was an accomplished photographer, and many of the photos used in the interpretive signage are from his collection.  His comprehensive Wildflowers of Grand Manan will soon be digitized and available on our website.  Funding for this exhibit was provided by Maude Hunter and private donations made at Maude Hunter’s 90th birthday party.

On display:  Along with three large biographical and habitat signs, there are two large stone-walled pollinator gardens and a pollinator sign discussing the importance of diversity, planting native species, pollination and listing some of the pollinator species found in New Brunswick. (3 photos)

One of Grand Manan’s most cherished lighthouses was situated. for 134 years, across the harbour from the Museum on Ross Island.  The Grand Harbour Lighthouse was first lit in 1879, decommissioned in 1963, badly damaged in the Ground Hog Gale of 1976, and finally destroyed in a late November gale in 2013.

On display:  Our gazebo commemorates the lighthouse with a covered area where you can sit and eat lunch, enjoy the view and the gardens, or read about the lighthouse’s history - it’s keepers and their families – and view a timeline of photographs that extends from its earliest years to its collapse.  You can also climb the stairs to the balcony surrounding the red cupola and survey a fine view of meadows, harbour and the entire outdoor exhibit area.  Funding for this exhibit was provided by 100 Women Who Care (Grand Manan), the Grand Manan Rotary Club Memorial Fund, and corporate & private donations. (3 photos)

The Deep Cove School House, built in 1889, and was the longest running one-room school house on the island, closing its doors in 1947.  Maximum enrolment was 19 and in 58 years of operation it had 51 different school teachers.

Teaching and learning were vastly different in one-room school houses than in contemporary schools.  Students in one-room school houses did not have traditional grades that progressed yearly, but had forms of continuous progress:  they would learn using books and their grade moved up as they advanced in their books.  Students would not only learn academics, but also home economics and employable skills.

The School was gifted to the Museum and moved to its present location in 1963.  In 2017 it was restored with careful attention to historic records with help from a provincial Built Heritage grant.  New interpretive signage was completed in 2020 with a grant from the Fundy Community Foundation in St. Andrews.