The two floor gallery includes the history of ship building, lighthouses and some of their keepers, ferries that have served the island, and the history of the first settlers of the Island. Commercial fishing from purse seining, weir fishing, scallop and ground fish dragging, and lobster fishing are all explained with informational model displays. The gallery has items from the many vessels that have been lost at the sea. This gallery also houses the spectacular Second Order Fresnel Lighthouse lens from Gannet Rock Lighthouse, and tells the story of a Grand Mananer who, because of his ingenuity, helped to win WWII.

By 1810, shipbuilding provided employment for a large number of island men.  Dr. John Faxon, who arrived at Seal Cove in 1803, has been credited with opening the seawall and building the largest ship ever built on Grand Manan, the full-rigged 500-ton John, c. 1811. There were active shipyards all over the island, from Deep Cove to North Head, which were supported by the increasingly busy number of sawmills.  By 1867 there were ten steam sawmills producing lumber on the island.Click to edit text. What stands you apart from the competition? 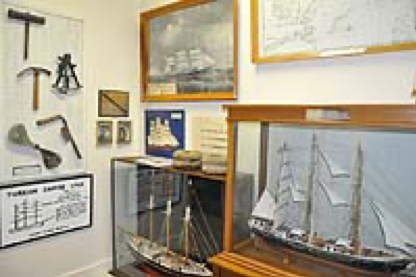 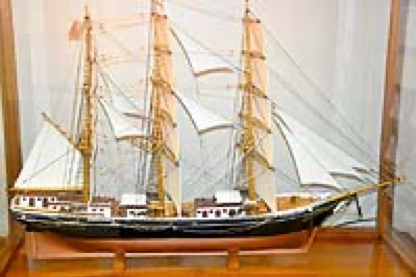 The Museum display includes a model of a typical three-masted vessel built and used around Grand Manan at the end of the nineteenth century, and a model of the Nellie T. Watters, made by Captain Snell of Grand Harbour and presented to the Museum by his sons, Ed and Benjamin Snell of St. Andrews.

The curved wall display on the History of the Grand Manan Fishing Industry:

Divided into four sections, the first is "The story of Grand Manan begins and ends with people and fish"!

The second explores the effects of the commercial fishing industry which produced major changes in processing methods, village life and technology.

The last two explore navigational aids and facets of the modern fishing industry. 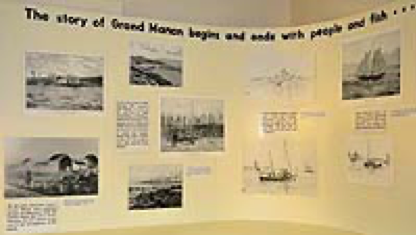 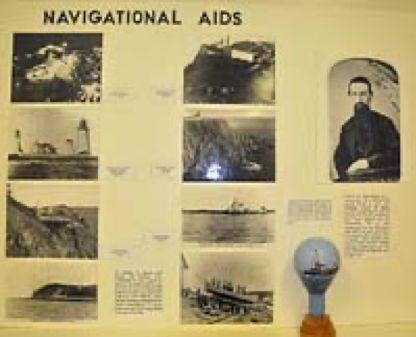 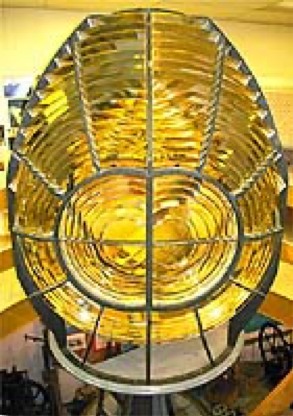 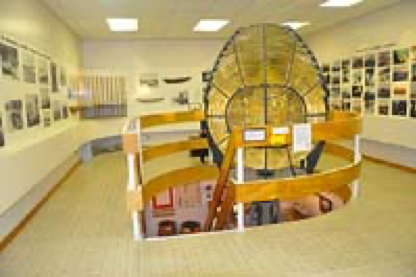 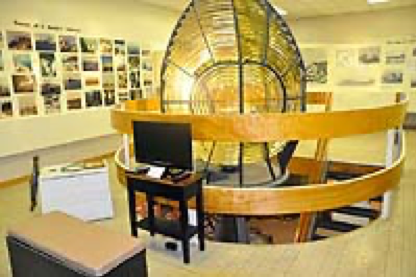 The two story light is so large the Gallery was built around it. The lens was originally installed on Gannet Rock in 1905.

The development of lenses which refract or bend light revolutionized lighthouse technology. Petroleum vapour under pressure was burned on a mantle producing 85,000 candlepower - making the Gannet Rock Fresnel lens the second most powerful light in the world when it was in operation.

New in 2014: Video Display Console: NFB Film "Down East Vol. I". which has a 10 minute Fishery of Grand Manan segment. 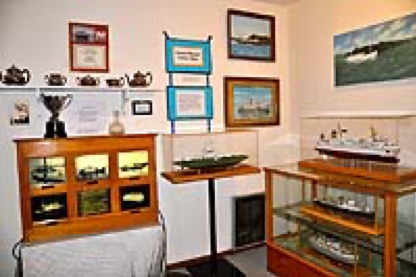 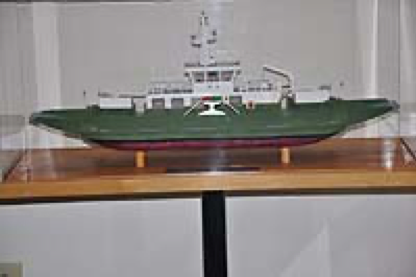 History of Grand Manan Ferries, including Lady White Head Ferry model, donated in 2012 by Ted Corbett, who oversaw the construction of the ferry and made the model.

Click to edit text. What do visitors to your website need to know about you and your business? 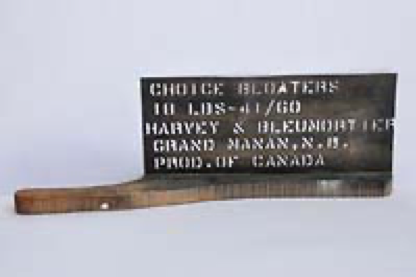 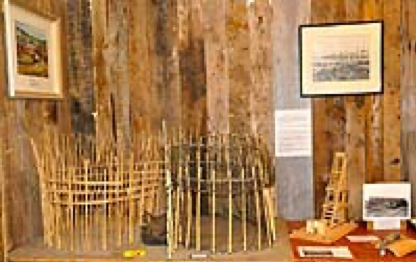 Herring Industry - Smoked herring used to be a regular part of life on Grand Manan’s shorelines, with as many as 300 smoke houses employing 1,000 seasonal workers.  Spanning 200 years as an industry, smoked herring was exported from Grand Manan as early as 1832.  By 1870 larger more efficient smoke houses were in use leading to increased production.  In 1885 US tariffs were responsible for the profitable expansion of trade to the West Indies which brought dark rum and molasses back to the island.  In 1891 the island produced 1.85 million boxes of smoked herring (Digby, Nova Scotia produced only 100,000 boxes), and by 1900 there were 160 producers on the island, falling to 18 in 1941, 10 in 1946 with only four remaining by 1995.  The last smokehouse, owned by John Ingersoll of Woodwards Cove, closed down in 1996.  In 1997 the Seal Cove Herring Stands were declared a National Historic Site. 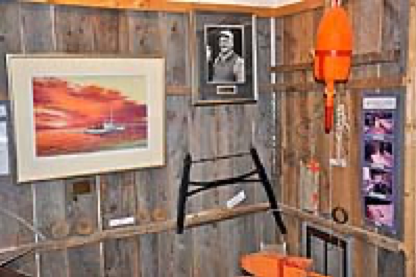 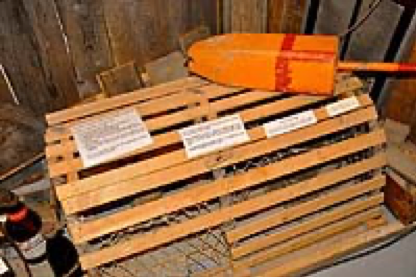 The Gleason Green Fisherman Exhibit - Gleason Green (January 21, 1898 - July 17, 1990  came from a large, successful, family of fishermen who lived on the Ingalls Head Road.  In 1914, when Gleason was just 16 years of age, he bought his first boat, the “Teaser”, which was custom built in Nova Scotia, paying $165 in hard-earned cash.  By the time his long career was over, Gleason had owned a total of 21 lobster boats.  On display in the exhibit is a watercolour by the well known Canadian marine artist, Oswald Kenneth Schenk, entitled “Bonny Bride”, a boat purchased by Gleason April 3, 1968.  Gleason was well loved by islanders and summer visitors alike, and was famous for the fine fish chowder he served on his boat tours.  Gleason has many fishing relatives on the island to this day.Click to edit text. What stands you apart from the competition?

Knot and Nets Display - an interactive display. Fun for museum visitors, but functional from a fisherman's point of view.Click to edit text. What stands you apart from the competition? 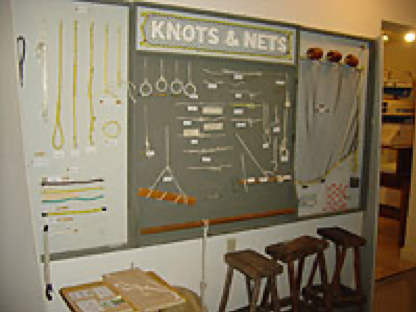 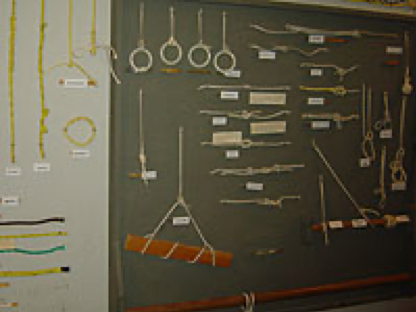 Fisherman/Farmer Exhibit - the two lives were a typical dance for a Grand Manan family - the two activities provided both food for the table and economic activity. The display is composed of many of the implements which historically were used.Click to edit text. What stands you apart from the competition? 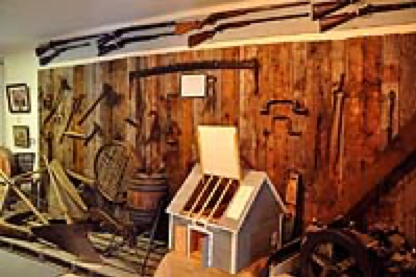 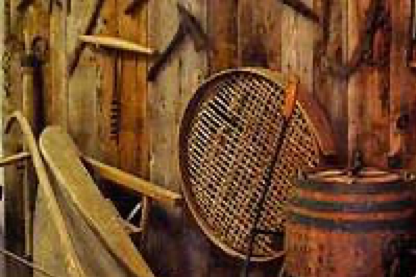 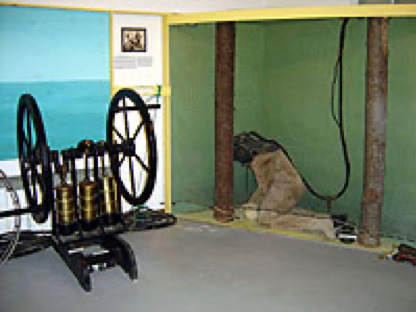 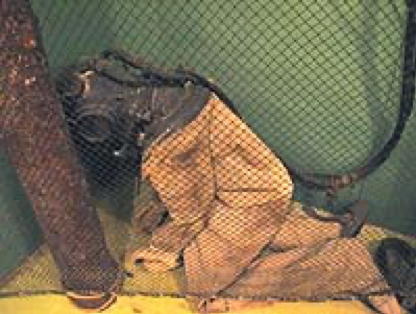 Snooks the Diver Exhibit - The role of the diver was important in the maintenance of weirs and the salvaging of wrecks.  This type of hard helmet diving suit is no longer used.  Modern divers use scuba gear which allows them more independence and freedom of movement.  “Snooks” the diver began diving at an early age, around 1917, doing a lot of weir work and various other tasks around the island where he was a familiar sight.  (The bicentennial quilt on display has a square dedicated to Snooks in his hard helmet diving suit.)

The large air compressor pump on display sat on the deck of the boat from which the diver descended.  Men had to pump the air down through a long hose, and the “tender”, as he was called, took care of the air hose, the life line, and also was responsible for sending down tools needed for repair work.  The diver would request a tool by tugging on the line, but later years had a telephone to talk on.

In 1958 Snooks had a heart attack and was forced into retirement, but his son, Erling Green, took over the job for the next 11 years.  Father and son dove for a combined total of 52 years. 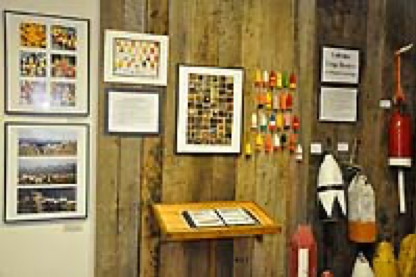 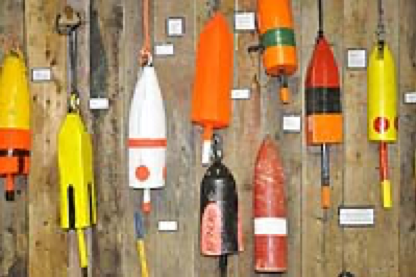 The Buoys Exhibit - the lobster buoys representing some of Grand Manan's fishing families' colours.Click to edit text. What stands you apart from the competition? 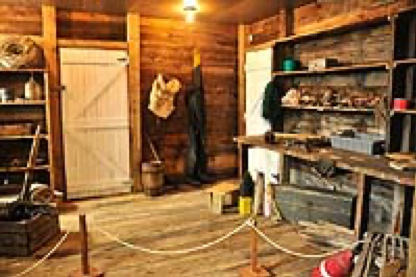 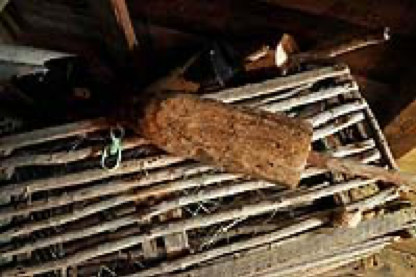 The Fisherman's Shed Exhibit - all the inner workings of an actual Grand Manan Fisherman's Shed, installed within the MuseumClick to edit text. What stands you apart from the competition?

Base of the Fresnel Light 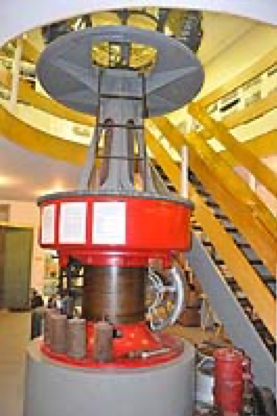 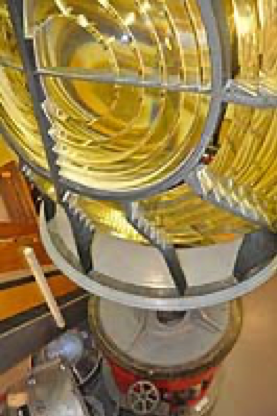 The base of the Fresnel light where the petroleum va pour was stored and burned. The extreme weight of the Fresnel lens required the "industrial" strength base for the light.

The Ship Wreck Gallery - a history of some of the many ship wrecks off the shores of the islands of the Grand Manan Archipelago. 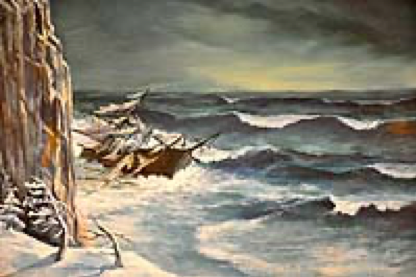 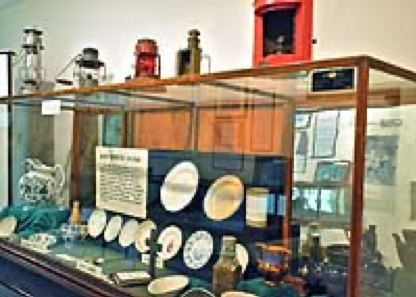